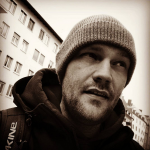 Rudolf Inderst (*1978) is a third-year PhD student of media studies at the University of Passau and enjoys video games since 1986. He received a master’s degree in political science, American cultural studies as well as contemporay and recent history from Ludwig-Maximilians-University, Munich and holds a PhD in American cultural studies. He is interested in game studies, political theory and the history of ideas.

Wolfenstein: The New Order as a player-centric continuation of dystopian narrative traditions

The developers and publishers of Wolfenstein: The New Order (2014) skillfully use marketing campaigning, in-game as well as cut scene storytelling, and game mechanics to set up a continuation of dystopian narrative traditions established in the 20th century. Media following these patterns focus upon the politics of anti-individualization and the transformation of the political human entity into a agenda-less spectator and heeler.