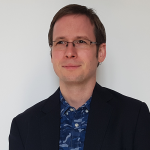 Sebastian Felzmann, M.A., studied German Literature at the KIT. Together with Adam Rafinski and Jens M. Stober he initiated the HfG GameLab. Sebastian has written a book and several scientific papers about media nostalgia and retro gaming and even held various lectures about that subject. As a book producer he supported Steffen P. Walz and Sebastian Deterding in the publication of “The Gameful World”, a 690-pages-thick handbook about Gamification.

„That’s a GAME?“ – „That is NO game!“ Core gamers are criticizing mainly the gameplay and the narrative mediation of „That Dragon Cancer“ – with harsh words and barely hold back aggression. My talk will have a closer look  into the narrative structure of „That Dragon Cancer“, the gameplay mechanics, its abuse of agency and its interconnection with the player experiences gained in prior games. For examining those I’ll use to concept of “scripts” as structured objects representing standardized generalized episodes as a tool to explain the profound unease that the players experienced.