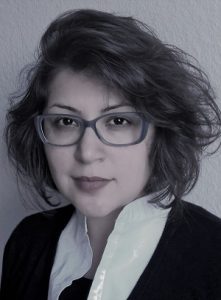 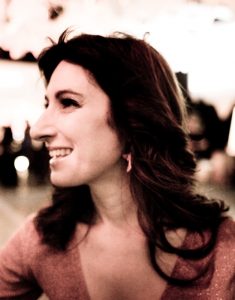 Alexia Bhéreur-Lagounaris has a multidisciplinary professional background that includes music, writing, dance and choreography before becoming an event creator and a game designer.

Trained at Montreal’s contemporary dance school, she performed for many productions, was an Art Scout for Cirque du Soleil, a creative director, scriptwriter for Radio-Canada, Wasabi, Lalala Human Steps and event creator for Québec Cinéma. She’s also a research geek Wizard at INRS (Institut national de la recherche scientifique) and her expertise in human-centric design is used in all her projects where collaboration and collective intelligence is enhance. She holds a Bachelor’s degree in interactive multimedia communication from UQAM and a master’s degree M.Sc. A. in games with a social impact from University of Montréal. In 2016, she founded her game events productions with ABLBLALAB, and creates social games, gives workshops, coaching and conferences.

WARNING: Not suitable for robots

In her 2018 thesis: « Games with a social impact: towards a new name for a Responsible entertainment » Alexia Bhéreur-Lagounaris concludes that the future of game design innovation needs a change of axis from the “game object” to “human subject playing”. But in order to bring to life the shift from object to subject, she concludes that human-centric design, means designing with and for the whole body. But what does it change to design for the whole body and what does it imply? After all, being human means to have a body, no?!

And this is where the plot twist takes place.

From piece of evidence of neuroscience recent research to philosophical work written in 1637, we put on the stand our system of beliefs and values about our body. We struck a deal with the responsible and finalize the investigation on why on earth we have been so trap sitting, in the “techno power trio” world (brain+eyes+finger tips). Surprise! The recent discoveries tells us that we think with our body. That Descartes made a mistake by separating thoughts and actions. And that our gut and heart have intelligence that we’ve been underusing. Ready to design, move and play mix realities on our feet?

In this conference:
We revisit the importance of designing-imagining-playing-feeling in holistic ways not just for the fun of it, but for our bio-psycho-social health stakes. We will take engaging examples from LARP, Augmented reality and physical games.
WARNING:
-Suitable for dopamine, serotonin, endorphin & oxytocin hormones.
-Not suitable for robots. 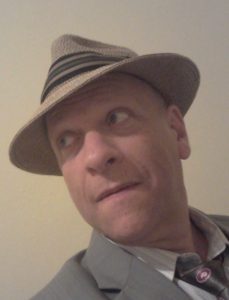 John NA Brown is a wandering polymath who has spent years trying to write the perfect autobiographical blurb. In this quest, he has become a research scientist, public speaker, author, designer, human factors specialist, cartoonist, bricklayer, encyclopedist, storyboard artist, and much more. He has written and taught university courses in Scientific Thinking, Research Methods, Computer Animation & Storytelling, and Applied Biomechanics, and has solved problems for Google, Facebook, and LinkedIn. Along the way he picked up a few PhDs and an embarrassing number of other academic degrees, as well as awards for animation, teaching, applied mathematics, and haiku. Currently at Evolv Technologies in San Francisco, Dr Dr Dr Brown has previously worked in a dozen countries, in the private and public sectors, in serious games, in recreational sports, and in his pyjamas.
He has yet to win an award for any of his autobiographical blurbs.

Video games require the player to iterate; to repeat their behaviour over and over again, making slight progressive changes each time. This is how the player learns how to move through and interact with the gamespace, and it is also how humans learn and master new skills in the real world. In both cases, new skills are first performed slowly and deliberately, with conscious and
thoughtful reflection. Eventually, through iteration, these new skills are mastered and become  pre-attentive: either predictions and reactions based on high-speed pattern recognition, or bursts of incredibly fast previously-learned coordinated reflexes called muscle memory. After the right kind of reinforcement, the conditioned behaviours can be triggered unconsciously. When someone’s pre-attentive and reflexive skills are repeatedly triggered, forcing them to respond too quickly for conscious and thoughtful reflection, they enter into a state of performance called Flow. In gameplay and in real life, this is where distractions disappear, and mastery of multiple overlapping skills can be developed. As with real life skill mastery, time spent in “gameflow” changes the player’s mind and body at an unconscious level. Application-specific gamification has been used to condition and reinforce pre-attentive behaviours that allow people to be put to more efficient use as a resource for military, political, and commercial interests. Gamejams could become the testing ground for games that develop unconscious skills that will help players level up in the real world. 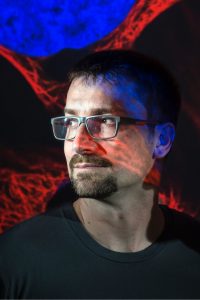 Attila is the CEO and co-founder of Massively Multiplayer Online Science (aka MMOS): a Swiss company specialized in connecting citizen science and videogames. MMOS founders received the prestigious Lovie Award and the IGDA Serious Games SIG Community Leadership Award for their role in creating EVE Online’s Project Discovery. Attila has a background in computer science and he co-founded and co-designed iWiW, which was the biggest social network in Hungary before Facebook, reaching almost 5 million users.

Mixed reality is the magic of overlaying virtual content on our real life environment. Can we use this magic the other way around? Can we add real life content to enrich the virtual worlds of games? We believe it is not just possible, but can bring interesting new experiences to games as well as substantial results to real life endeavours.

In the last 5 years we worked on projects along this line: to mix real life research into already existing games. The first project of Massively Multiplayer Online Science, Project Discovery in EVE Online yielded hundreds of millions of scientific data analysis submitted by players and getting EVE spaceships flying across the cover of Nature Biotechnology. Come to hear about how Project Discovery was set up and about the latest results.