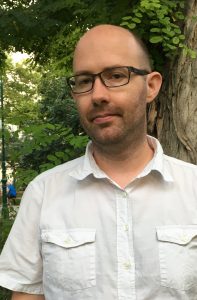 Damian Stewart is a New Zealand-born Wiener. As well as being a veteran of the Austrian and New Zealand game industries, he has worked as a software engineer for interactive design, AR and VR projects, and as a professional artist and musician. Damian is currently studying toward an MA in Anglophone Literatures and Cultures at the University of Vienna.

“This Is For The Players”: Industry Construction of the “Gamer” Identity

In 2019, almost everybody plays videogames. However, the dominant cultural narrative around videogames says something different: the stereotypical “gamer” is still an under-socialized straight white young man playing with toys in the basement. Negative stigma leaves many players unwilling to self-identify as “gamers”; those who are willing to do so often work to reinforce the stereotype (despite its negative connotations) by actively excluding those who do not “fit”.

Drawing from a growing body of recent scholarship that examines the behaviours and identities of players often subject to exclusion from videogame culture (such as women, queer people, and people of colour), the present work argues that the “gamer” identity is a subcultural formation constructed by and for the benefit of the videogame industry, and that the cultural idea of the “videogame” exists hand-in-hand with the stereotype of the “gamer”.

To illustrate this process, an analysis of selected scenes from the film Wine Country (2019) and the TV programme Dirk Gently’s Holistic Detective Agency (2017) reveals how these media construct a “gamer” identity in tandem with a particular conception of the videogame as a cultural artefact. Comparison with industry practises and “gamer” behaviours suggests a similar parallel construction of identity and cultural artefact at work in the videogame industry; here, however, the reality of a broad, diverse audience of videogame players renders such constructions inherently contradictory. This causes ongoing conflict and exclusion and ultimately stunts artistic growth within the medium; until it is addressed, irrespective of technological improvement, the promise of videogames will remain unfulfilled.